We build React web apps
Talk to us
Community initiatives
Views on technology
youtube-dl taken down on GitHub!
The Youtube-dl repo contained open source code, written in python. This code could be used to download videos from a variety of places, including youtube. There was nothing illegal in the code which the repo contained.

Open source software was a movement which can be traced down to the rivalry between Microsoft and Linux. A lot was said and done then, at that time Windows aka Microsoft reigned the tech industry.

It was around about 2010, when open source software started getting main stream. Github the place were open source code lives, became big. The next 10 years would see immense innovation and collaboration happening in open source. Most of this code lived on Github.

So when Microsoft purchased Github in 2018, it was not a good feeling, as it reminded me of the times when Microsoft used its monopoly in an unfair manner. Yet, I hoped Microsoft has changed as a company, especially with Satya Nadella leading from the top. I hoped the new Microsoft would embrace the spirit of open source.

Today, Microsoft, which now owns Github, took down an open source repository called youtube-dl based on a complaint from DMCA. 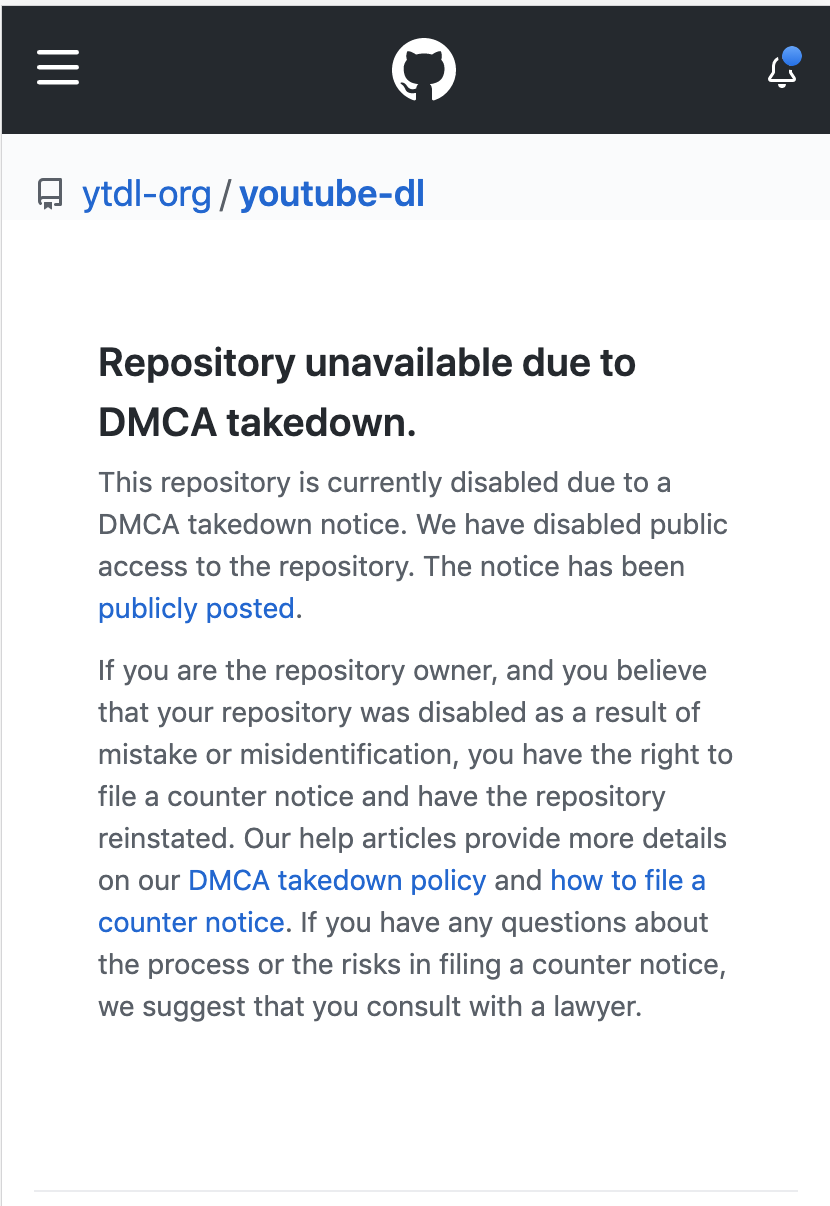 The repository owners were not given a chance to respond before take down. Youtube-dl is (was) one of the most popular repositories on github with nearly 77K stars.

Youtube-dl could be used to download videos for playing, in places with poor connectivity. The next billion. It had many good uses, downloading youtube videos was just one of them.

The Youtube-dl repo contained “original” open source code, written in python. This code could be used to download videos from a variety of places, including youtube. There is (was) nothing illegal in the code which the repo contained.

If big tech (read microsoft, youtube etc), had a problem with what this code does, then they should look at technical solutions to prevent their videos from being downloaded. They should have explored ways to make their services secure.

The DMCA complaint has no basis. Yet, Github took down the repo.

If big tech did not have a suitable technical solution to prevent the software from downloading its videos - it is a technical problem!

They cannot use dictatorial means to implement their policy. That is what they did by taking down a repo which contained original code. This is a misuse of the priviledge of owning the platform.

If YouTube had a problem with this code being able to download videos from their service, then they should have looked at updating their software to prevent what they felt is against their policy.

(I know in this case, the browser comes with some limitations, and many of those limitations is what makes a free internet.)

Instead Github (Microsoft) has sided with the powerful DMCA and used their priviledge of owning the platform (Github) to take down open source code.

This is totally against the spirit of open source and will not succeed.

What do you think? You can reply to this thread